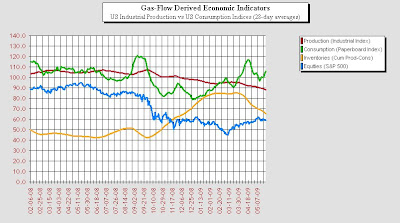 Last weeks sharp turn around in the Consumption Index continued this week, as the index (in the context of its 28-day moving average) extended itself to nearly reach year-ago levels. On a daily basis, paperboard-gas-flow scheduling (on which the index is based) softened early in the week, before strengthening again sharply on the Memorial Day weekend..


The production Index, however, bucked the trend and fell to its eighth recession low in as many weeks (though it continues showing a bit of strength in its dailies) as industrial natgas flow scheduling (though higher from previous days) could not make up for the extreme early-May weakness.


Within the production index last week (on a daily basis) many industry groups (with noteworthy exceptions of refining, automotive and steel) continued improvements in their dailies. Overall, I took it to be a second good week-in-a-row economically (if the data is correct), though everything-automotive is still suffering.


The new Inventory Index once again suggested (if both the Production and Consumption Indexes are right) that industry has been using the recent spurt in consumption to clear out inventory-clogged supply channels (as opposed to increasing production) and also suggests that half of the implied inventory overhang may have been worked off. I remain, however, leery that a rising dollar combined with lowered shipping costs might also provide an alternate explanation to the recent weakness in industrial & steel gas-flows. Waves of steel-imports have decimated the US steel industry in past periods of recessions and oil-price weakness. The same could be happening today.


Overall, the recovery to me looks to remain intact, though fragile. It may be that industrial production may have to remain soft (with little in the way of rehiring) until excess inventories are worked off. If consumption can hold, perhaps the fragility of the economy will end once inventories are down to acceptable levels, and rehiring produces stimulus of its own.


Equities are a concern. Markets appear to be drawing some resistance, and with little in the way of direct consumer-stimulus other than a rising stock market (oil has turned up and falling natgas won't matter much until heating season) the whole of the economy is probably dependent on equities.