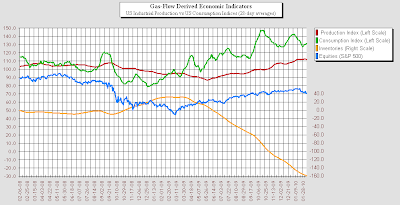 The US Industrial economy meandered lower last week (if pipeline scheduling is correct), while brisk consumer spending slightly ticked up.

The Production Index (In terms of its 28-day moving average of gas-flow scheduling into US industrial facilities) eased off of the previous week, fading to 111.8 from the prior weeks all-time high of 112.3. In its dailies (as per the "Part 7" industrial daily posts on the IV-CWEI site) the week started off sharply but eased as the week progressed.

On a sector-by-sector basis... Paperboard, LNG, Auto, and Metals (including the Copper & Steel subgroups) all started January strong... while refining, Minerals & Mining, and Lumber started a bit weak to December

The paperboard-based Consumption Index broke a string of four soft weeks (as a nervous US public coped with a decline in equities), rising to 131.0 from the previous weeks 129.5. In its dailies the week was somewhat stronger early then moderated a bit.

The Inventories measure (the cumulative weekly difference between the Production Index and the Consumption Index) continued it's "ever-lower" habits, remaining well-below pre-recessionary levels.

Overall (at least short-term), the gas-flows are starting to exhibit a slowing, stalling, meandering look... (no doubt reflecting at least in part the malaise in the markets, the malaise in government, and the malaise in employment), leaving one to wonder what comes next.

As recoveries (and recessions) feed upon themselves, a loss of momentum opens the door to unpredictability... where a single news story... a single political gaff... a single down-day in the markets... even a single meteorological event (such as a crippling snowstorm) can impact consumers in such a way as to get a ball rolling that will quickly become difficult to stop.

The danger is not so much on the Industrial/Business side of the economy (though businesses will and do react, compounding problems) but on the consumption side of the economy... where consumers (at a single bad news story) will cut back spending... "just in case".

In my own opinion... every recession starts out by "just in case".

A central bank (such as the US federal reserve) should not be playing games with its money supply to either restrict liquidity to the point where people don't have the cash to buy (thereby killing the economy). And it shouldn't flood consumers with money to the point where it empties store shelves then degrades the value of money (thereby killing savings, retirement funds, college funds, etc). A central bank should act rationally, in the best interests of a nations economy, and not necessarily in the best interests of private banks and lenders (which might selfishly prefer that money be tight so that consumers are encouraged to borrow and not have the liquidity to repay).

I have a problem! I am a stock trader. I neither make products that consumers can use, nor do I sell services by which consumers can benefit. If not careful, I could (like a leach) suck out profits from trades through cleverness... and consume that to which I do not contribute.

Rather, I try to limit my trading to more medium-term equities that would encourage (in the long-haul) more equity to companies which would (hopefully) in a modest sense encourage just a bit more energy production into the economy.

I also try to "give back" through these posts which I very much hope will be at least an encouragement (if not help) to others who invest more into the economy than I (both financially and through expertise).

Having said that (with my own weaknesses in mind) there are other occupations (besides trading) which have the potential to drain from (not add to) the collective productivity of a nation.

On to health care. As a kid, I can remember my father taking me to a doctor in a very modest, small office... no receptionist... no nurse... no records manager... no fancy lobby... and paying for EVERYTHING with a $5 dollar bill. With my kids today... can't get in the door for less that $200.

Our last insurance payment (Michigan Blue Cross)... $1,205.84... For one month! For my family, we can afford this. But for many, it is not going to happen. Either they do not have the insurance, they will have to drop it, their employers will have to drop it, or the government will have to "socialistically" force money into the economy to pay for it. And Blue Cross tells us its going up another 30% shortly!

Now a problem might be that too many hands (outside of health care) are getting their hands into the pot, driving up costs. Insurance salesmen, trail lawyers, defense-attorneys, loss-prevention specialists, and the like certainly neither add to health care nor reduce its costs. Their costs, their facilities costs, court costs, along with lottery-sized awards, extra spending done to fight off those awards (extra tests, fancier offices and lobbies to "look" more competent, fancier records management to "look" less incompetent, and more-extravagant buildings to "look" more professional) might all add much more costs to the pot. Perhaps Democrats need to give on tort-reform to encourage Republicans to give on insurance-reform.