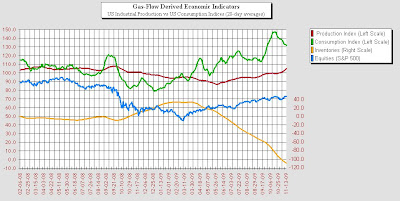 The US Industrial economy greatly intensified the prior weeks surge (if pipeline scheduling is correct), consumer spending retained its strength, and signs continue to abound of a very early Christmas shopping rush.

The Production Index (In terms of its 28-day moving average of gas-flow scheduling into US industrial facilities) added its 22nd advance in 24 weeks, and now stands higher than at any time since October 8th, 2008 (It bottomed May 28th). The index commenced its third-leg up in the recovery at an extremely steep rate, which (if it continues) would suggest the US as a whole emerges entirely from recession within days.

In its dailies (as evidenced by the "Part 7" industrial daily posts on the IV-CWEI site) it was wild... with scheduled gas flows to industry increasing 8% from the prior week. For the natgas markets, it implies 13 BCF per week added to demand. The gap between the consumption index and production index has been arguing for such a sharp increase in manufacturing, as has the low level of the inventories measure.

On a sector-by-sector basis (as per the "Part 8" posts) the steel delivery natgas scheduling remains very firm (steel has been front-and-center in the recovery) and a good start for the month (vs the previous month) in the paper, chemical, fertilizer, refining, auto, building materials and livestock groups.

The Paperboard-based Consumption Index again softened in its latest week, though in its dailies it gained ground and remains well above the Production Index, supporting the recent momentum of industrial recovery.

Within its dailies, the consumption index (though it advanced) did not attain the ramp implied by seasonal factors, presumably because it attained that ramp prematurely weeks ago when the Christmas shopping rush looks to have begun early.

The Inventories measure (the cumulative weekly difference between the Production Index and the Consumption Index) continues to drop fast and remains well-below pre-recessionary levels. Once inventory-rebuilding kicks in (assuming nothing tries to derail the economy), another meaningful surge in the industrial economy (and natgas demand) is unavoidable.

Question now becomes... are we now about to exit the recession with a 10% unemployment rate?

Six months ago, we had a demoralized consumer segment. The tables have turned. We now have a demoralized industrial segment, being dragged along to higher output seemingly grudgingly... by low inventory levels and robust consumption. This is actually a good argument for higher margins and a whale of a good fourth quarter... as events of the open market drive up margins to meet perceived risk. But it is also a good argument for inflationary pressures in 2010, unless that perceived risk abates.