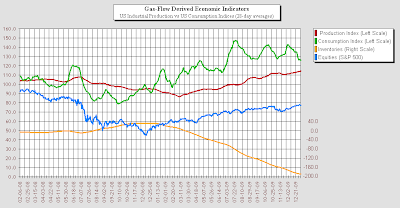 The US Industrial economy continued to forge ahead last week (if pipeline scheduling is correct) while consumer spending eased slightly in the wake of last Sundays landmark health-care congressional agreement.

The Production Index (In terms of its 28-day moving average of gas-flow scheduling into US industrial facilities) extended its recent push for the sixth week in a row, rising to 114.4 (from the prior weeks 113.7), and achieved its third record high in as many weeks. In its dailies (as per the "Part 7" industrial daily posts on the IV-CWEI site) the week started firm over the weekend, softened ever so slightly on the congressional deal for a couple days, then restrengthened dramatically late-week (in line with pre-Easter seasonals).

For the fourth week in a row the paperboard-based Consumption Index again bucked the trend and dropped to 126.2 (from the previous weeks 128.4), In its dailies the seek started soft over the weekend, firmed modestly for a couple days on the congressional deal, then softened at the close of the week.

The Inventories measure (the cumulative weekly difference between the Production Index and the Consumption Index) continued to fall, although at a slower pace than in recent weeks.

It seemed there was very little impact within the gas-flows to last Sundays announced health-care deal, with the overriding multi-week trends of rising production continuing to close the gap to slowly declining consumption. Perhaps Sundays announcement was expected. Perhaps it was not believed. Or perhaps it was ignored.

My own long-term view of the health-care bill is that it will (if it survives procedural and legal challenges) eventually prove to be a cash-flow transfer away from the consumer (health-insurance payer) to the investor/producer (doctors, lawyers, drug companies, etc) that will have to be accommodated somehow by either the Federal Reserve or further government stimulus... to prevent consumer-dollars from being diverted into health care (to cover 31+- million new US citizens) from elsewhere in the economy.

Chief of concerns continues to be the ongoing slow drop-off in the consumption index dailies, should it not reverse soon (Though the consumption index is a very volatile index... mirroring the emotional volatility of the consumer). Also of concern is the continuing lag in the Production vs Consumption Index (which continues to imply a shallowness in the productive end of the US economy... which is a continuing drag on employment and job-creation).